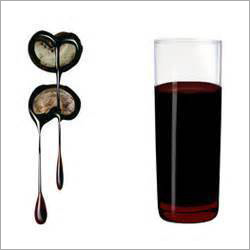 Bhilawan Nut Shell Liquid (BNSL) is obtained fromthe Pericarp of the Bhilawan Nut which is popularly known as Marking Nut, whichis similar in Taste and Nutrition to Cashew Kernel. Bhilawan or Marking Nut isused in medical precautions and its most useful part is its kernel, which isknown as Godambi and used as dry fruit. It is also known as marking nut. It isspecies of Kaju.

BNSL is Black Corrosive Vesiccant Liquid whichcauses Painful Blisters on the Skin. It contains about 46% of a CatecholDerivative, Bhilawanol having Long Unsaturated Carbon Side Chain (C15H27)and other High Boiling Phenols. The rest of the Liquid is mostly a Tarrymaterial Composed of High Boiling Phenols and Hydrocarbons. On Hydrogenation ofBNSL (Boiling Point: Between 213 - 214), Hydro-Bhilawanol is obtained in theform of Silky Ã¢€“ Needles (having Melting Point between 57- 58). The recent studyby IICT, Hyderabad, on the Constitutional make up of BNSL by NMR Techniqueshowed that the Diene Concentration of Bhilawanol is about 70 Percent. It canbe reacted with Formaldehyde & Hexamine in presence of Catalyst and Heatbodied to obtain suitable Stoving Finishes.

Due to its highMedicinal values medically it is used in curing of Rheumatism, Leprosy, Eczema,and other Skin Diseases under Medical guidance. Industrially it is used forCoating of Baskets, Boat Planks and other Wood work as Preservative, InsulatingVarnishes, Core Plate Insulating Varnishes and Water Proofing Composition. Itis also used for making Black Stoving Enamels for Cycle Mudguards, SewingEnamels & Table Fans. It has also got applications similar to that ofCashew Nut Shell Liquid (CNSL).

Resin: We are manufacturing BNSL Resin with & without Gilsonite Powder. Itis supplied in 80% or 70% solids with MTO Solvent.  Colour of these Resins will be Dark Brownwithout Gilsonite and Blackish with Gilsonite. Specific Gravity will be between0.980 to 0.990. It will be little high viscous in nature. They are compatiblewith CNSL, Alkyds, Epoxies, Drying Oils, Bitumen & Coal Tar.